We had a normal start: shower, breakfast, walk on land. We left at 10:00 h. Our intention was to reach Kristiansand by early evening. After a last glimpse at the nice church we motored out of the small sound and turned southeast to avoid the irregular waves close to the shoreline. It was actually dry, no rain and even sunny. After two hours the wind increased so we could unfurl the genoa and sailed along the coastline in near-perfect conditions. After about six hours we had reached a waypoint close to Kristiansand.

We knew that the conditions for crossing the outer Skagerrak were best right now, what meant to sail through the night. For the next day the wind was predicted to be variable and then turn northeast so we would have to motor a fair bit. We decided to sail on. 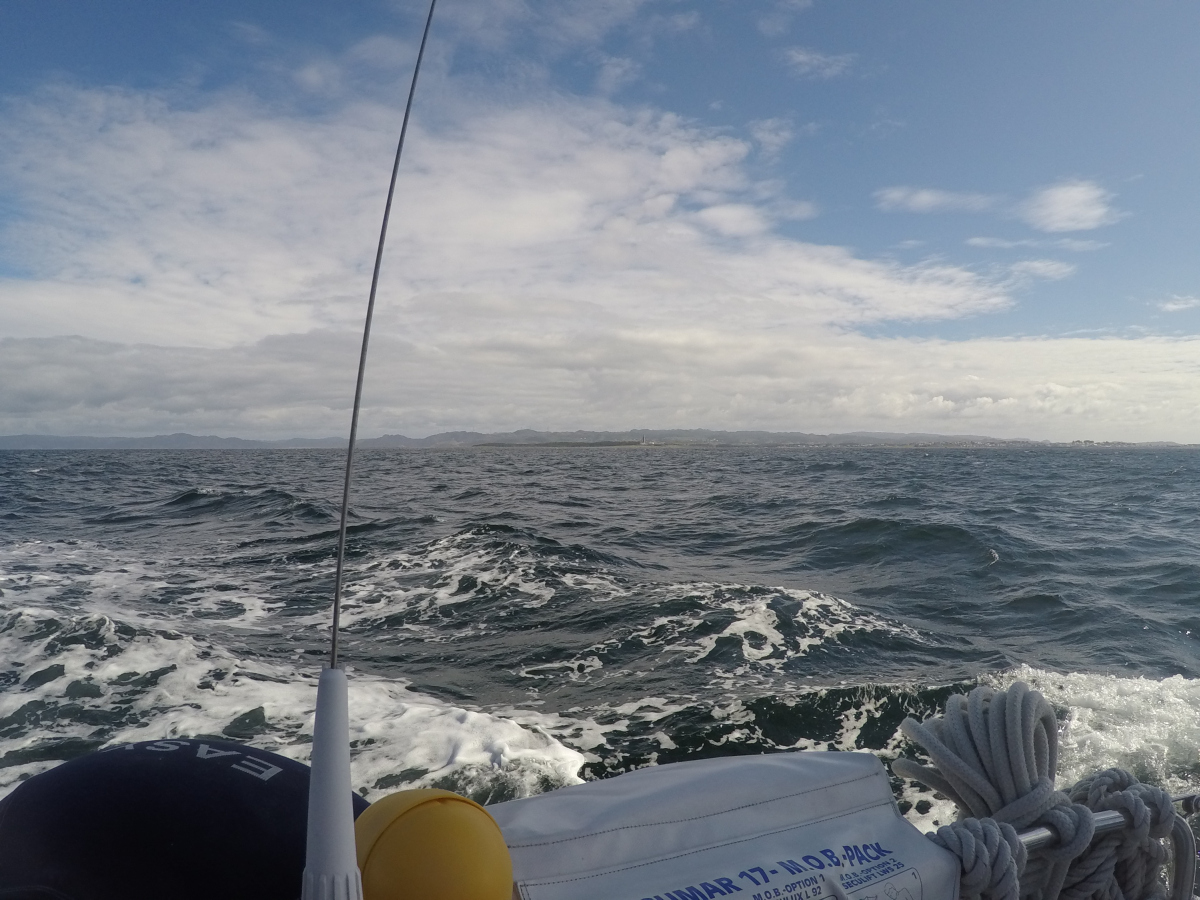 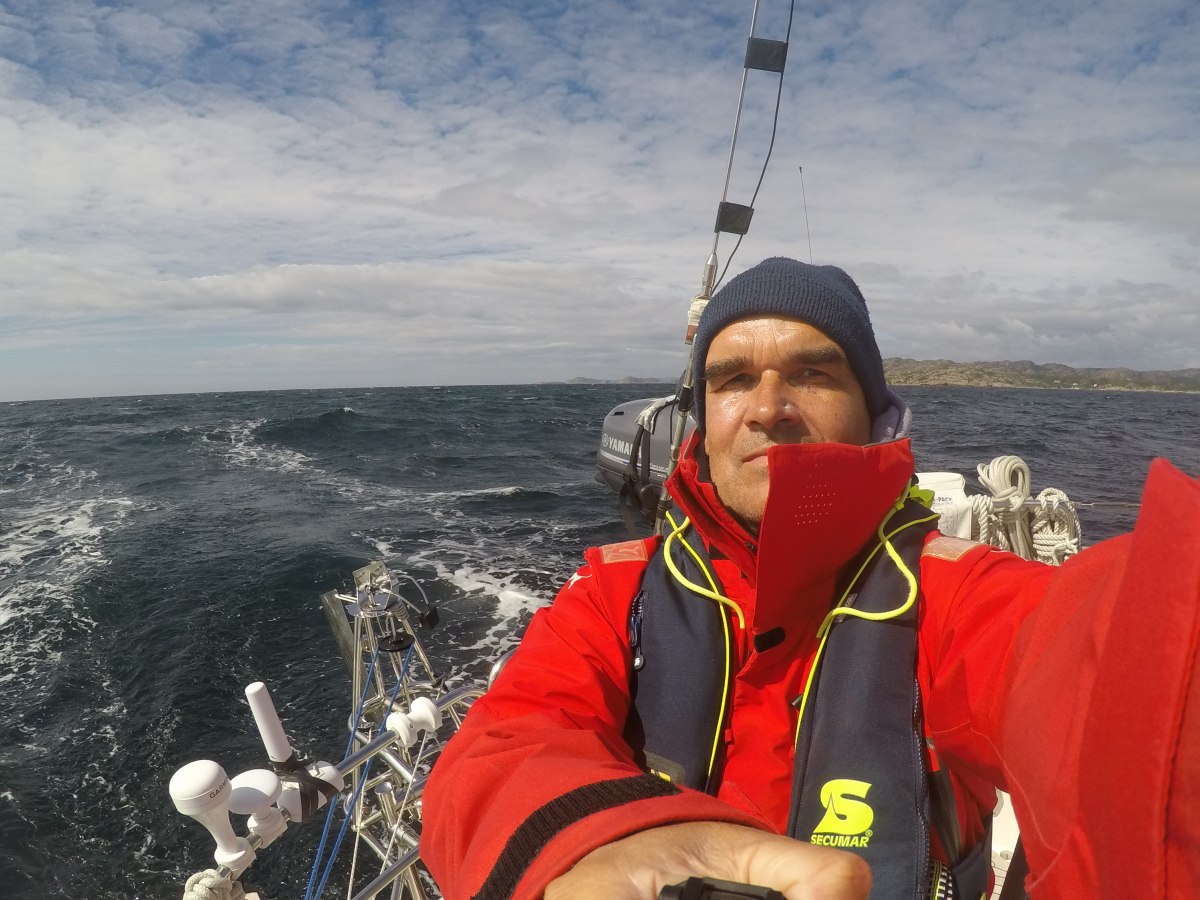 What then followed was quite a surprise. The wind was constantly blowing from west-northwest and we made some 7 kn through the water just with the genoa. I had underestimated the Norwegian Current along the coastline against us. This current slowed us down to 5 kn for several hours. The swell increased by the minute and came from a southwesterly direction. With the current against the swell the waves were quite steep and started to brake so I could not gybe and escape the coastal current. Then, the current also slowed the swell which turned its direction even further to 60° from the direction of the increasing wind waves. Finally, I had to handsteer for 5 hours riding down the wind waves and luffing with every high set of the swell to keep our stern perpendicular to the steep, sometimes braking swell waves. The highest waves were around 3-4 m. 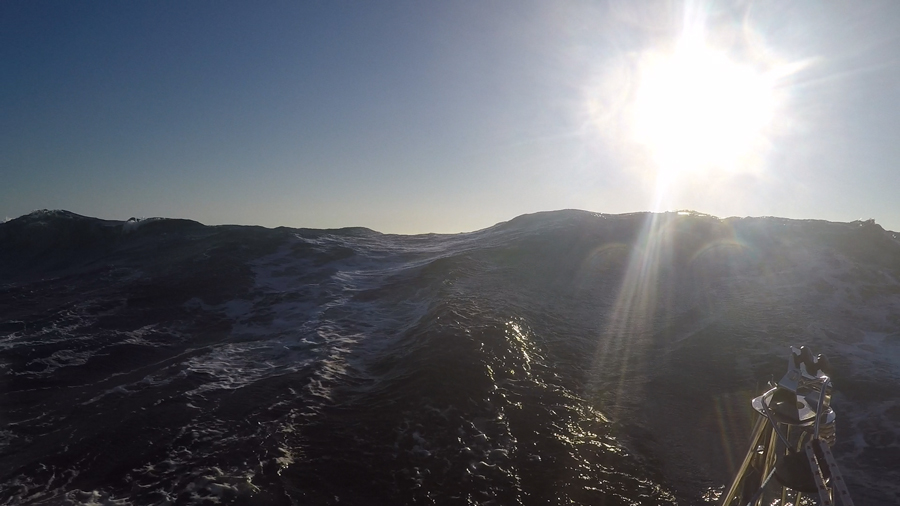 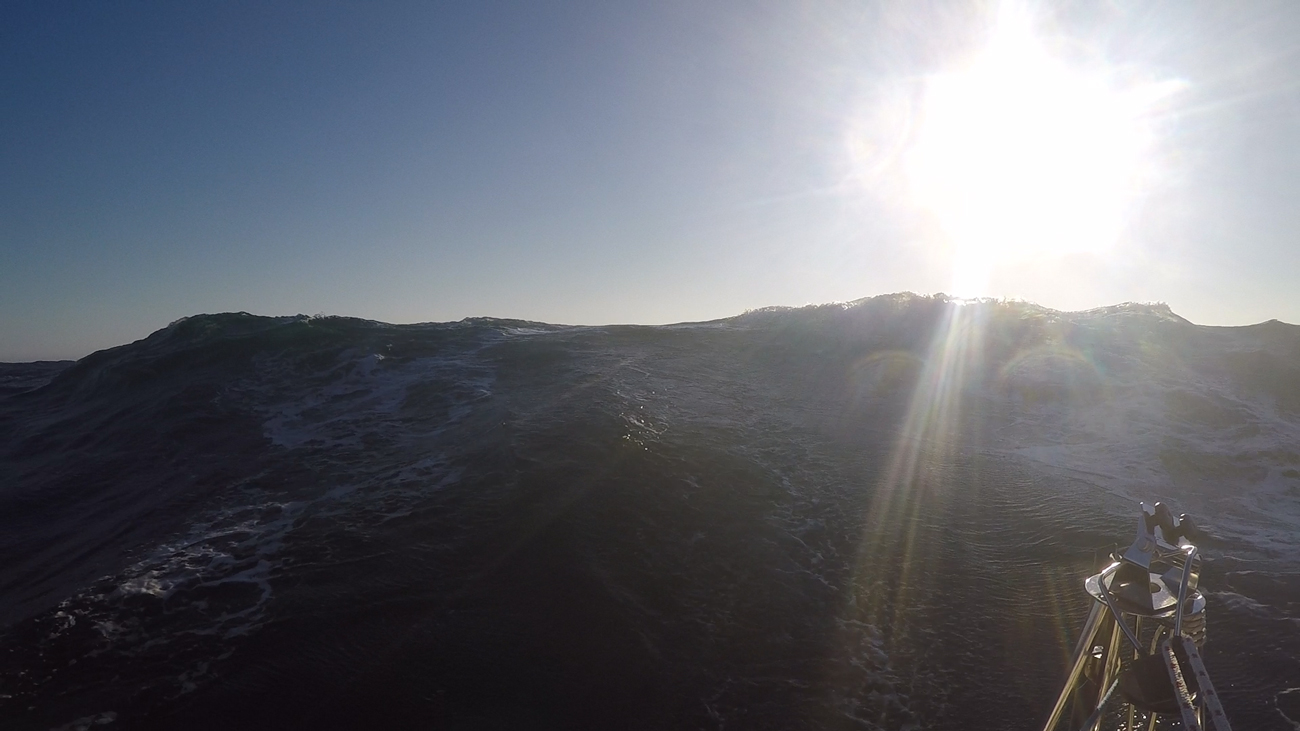 The sunset over the distand Norwegian shoreline was nice. 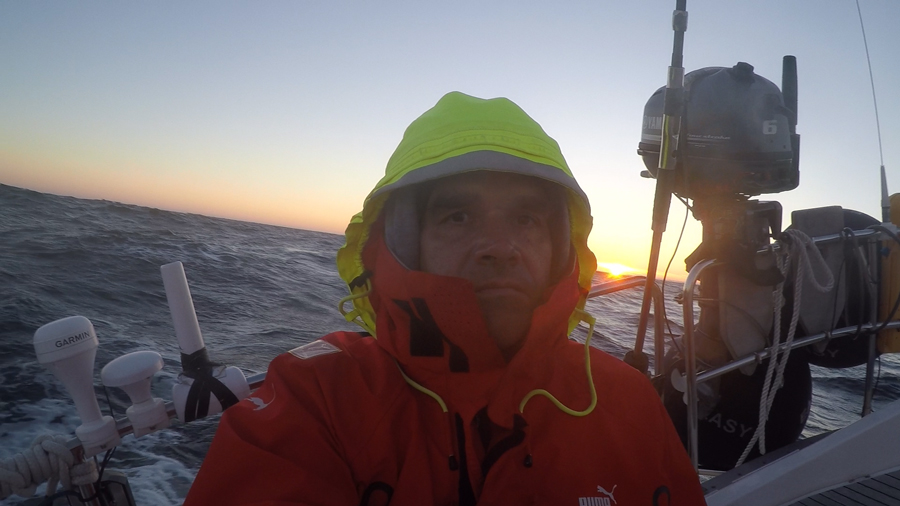 Most importantly, I was dry for the first time during our Trip in Norway, and did not freeze. I heard five albums of Pink Floyd with my FLAC player and earphones. Kirsten was under deck, but in good spirits and none of us got seasick. The catch 22 situation eased after we had left the Norwegian Current, and I engaged the autohelm and went into singlehanded mode: I went to sleep for 20 min and had Radar and AIS on the plotters and on a tablet in my bunk. Every 20 min I went up the companionway and had a lookout. I did not have to give way to any of the many ships in the busy Skagerrak shipping lane. Also, our straight line led us just between the flock of fishing vessels. The high-speed ferry from Hirtshals to Kristiansand gave way to us with a CPA of 1 nm.

The wind decreased in the morning hours and I started the engine for the final 20 miles. Even when rounding the spit at Skagen where North Sea and Baltic Sea meet, we did not have to give way to any of the many vessels taking that route. Every ship that does not pass the Kiel Canal that enters the Baltic Sea has to take that route. The accumulation of ships showed best on our plotter. We are the black boat in the center. The polar performance of 197% did not resemble our superb sailing skills but was the result of motoring in no wind… 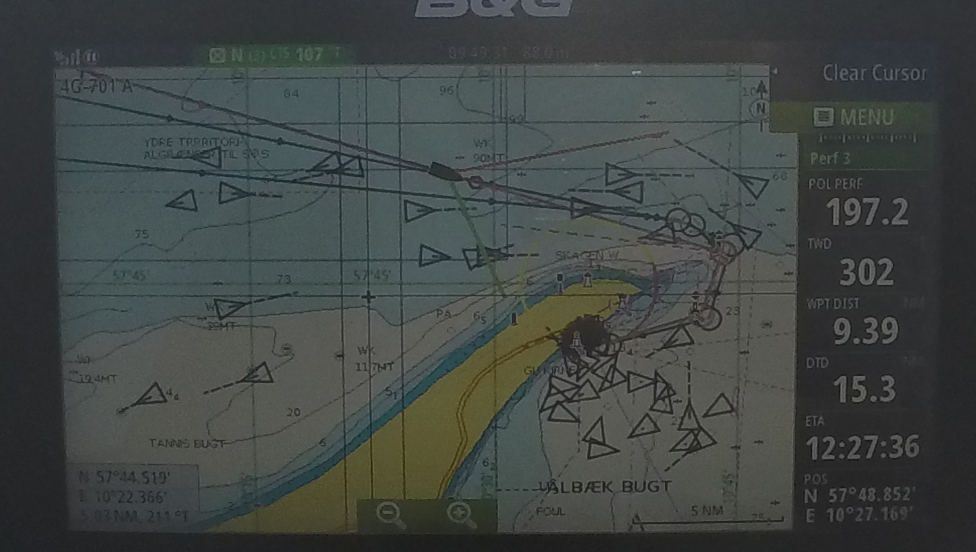 Kirsten took a photo of the ships from land later. 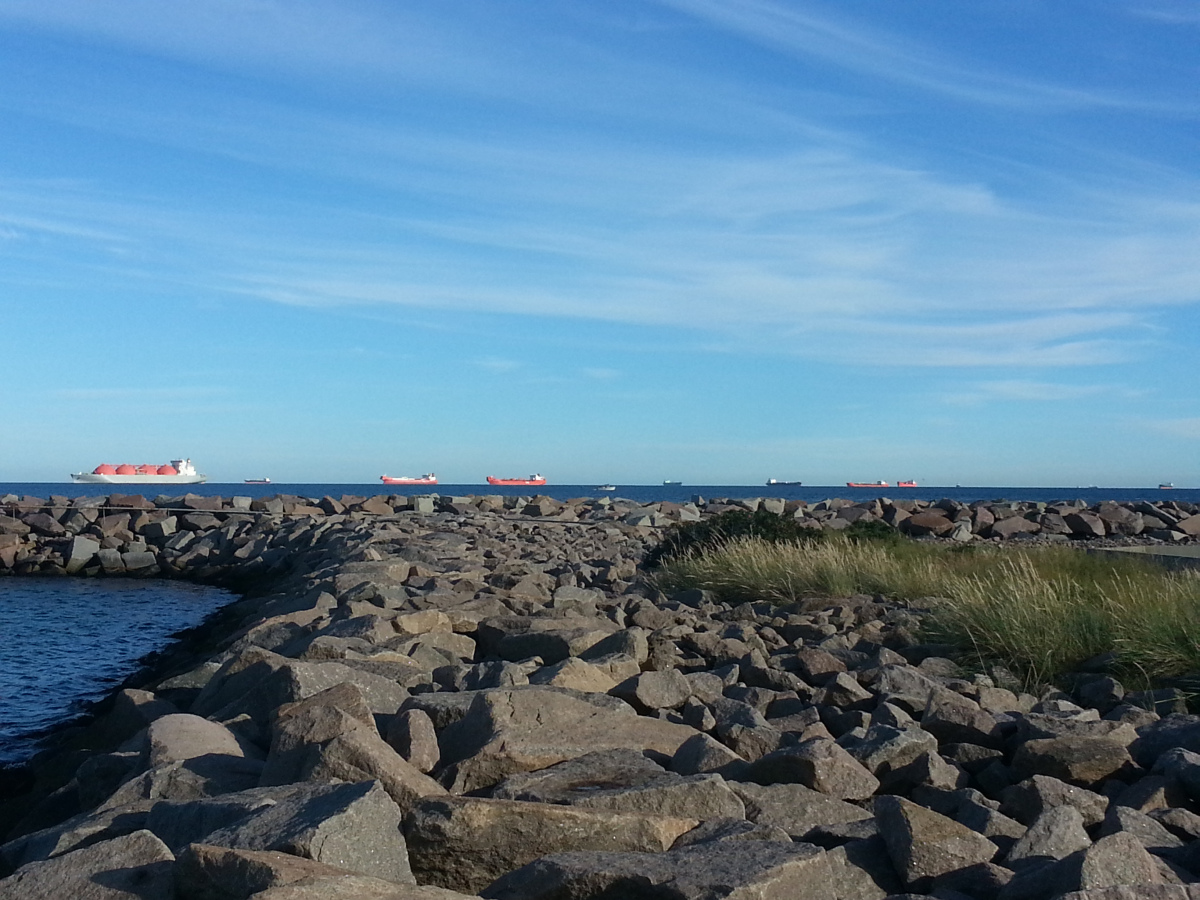 We found a berth in the guestharbour in Skagen. Walking along the busy and touristy pedestrian area in Skagen was some cultural shock for us. There were days in Norway, when we had not seen more than two or three people per day and here were hundreds of people walking around us. And we felt for the first time since two weeks that it is actually a summer trip.

In the evening we had plaice by the harbour and met Tore who has been living onboard his ship since 20 years. He had just returned from the Mediterranean Sea with his Ovni 435 and we had a close look at this great ship.

We had a warm and sunny day with nice sailing in wind of 5 to 14 kn. We reached Læsø after six hours. The harbour was full and we went alongside two Swedish boats. We then walked up the beach but the temperature fell so rapidly that we gave up our plan to go for a swim.

A local variety of Shrimps is called Jomfruhummer (Nephrops norvegicus). We bought some in the small store and had them for dinner. 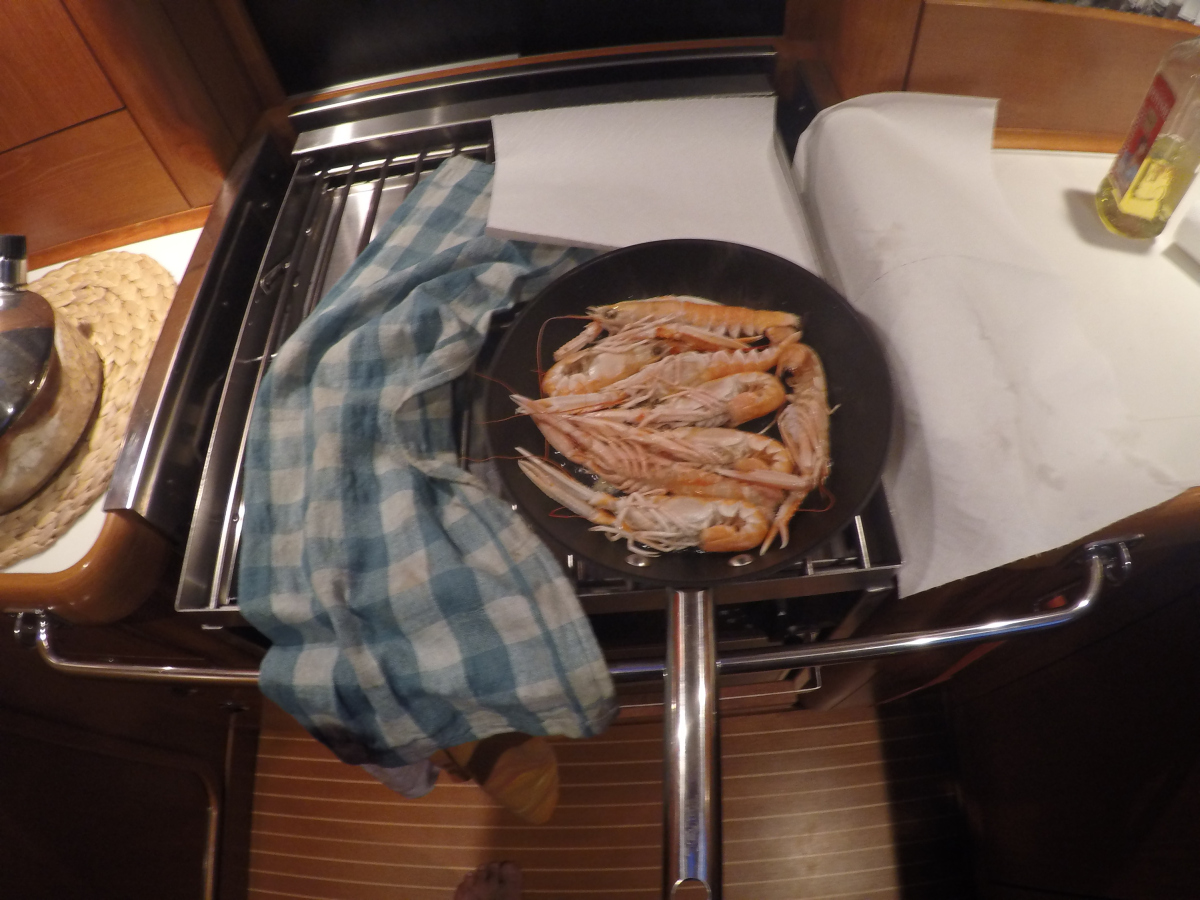 Last time we had them was two years ago on Anholt, and we were not really fond of them then. This time, again, none of us really liked them. We went to bed early since our Swedish neighbours had planned an early departure.

Another day of sailing at its best. Wind from behind between 14 and 16 knots. We tested the Monitor windvane in these conditions and it performed faultlessly. The day went by with many gybes, changing the spinnaker pole from one side to the other and adjusting the sails to use get the best speed from the changing wind.

Suddenly, we spotted a dolphin with a length of about 1,5 m. It played around the bow of EASY for about 15 min. The game was to slow down on our port side to enter our bow wave and surf it down for some seconds. This was followed by a rapid sprint to our bow where he slowed down to come very close to our hull. Then he dove down and swam back to our stern and the cycle was repeated. 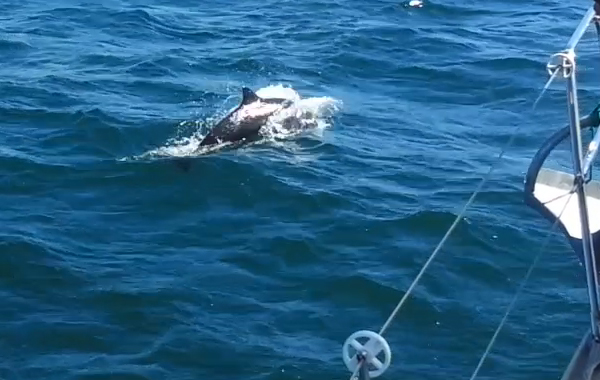 I was standing at the bow and had the impression he watched me when approaching the bow. It was a moving experience and I am glad that Kirsten was moved by this so much, too. Luckily, Kirsten also took a video with her smartphone since. I had filmed the scene with an empty battery in my Gopro, and all my expert video material showed were still images of the blue sea but not a single video of our dolphin.

We then passed a sandbank north of Anholt with exceptionally green water which I have never seen in another location outside of this Area around Anholt. The last stretch to the harbour was with wind abeam and waves from the side and our B&G autohelm was struggeling hard to keep this course. We took down the sails in the swell at the harbour entrance and tied the sail tightly to the boom to minimize wind resistance when picking up the mooring buoy with the stern line in side wind at the west pier of Anholt harbour.

We then entered a phase when the separation between individual days disappeared and everything felt like it would infinitely go on like this, forever. 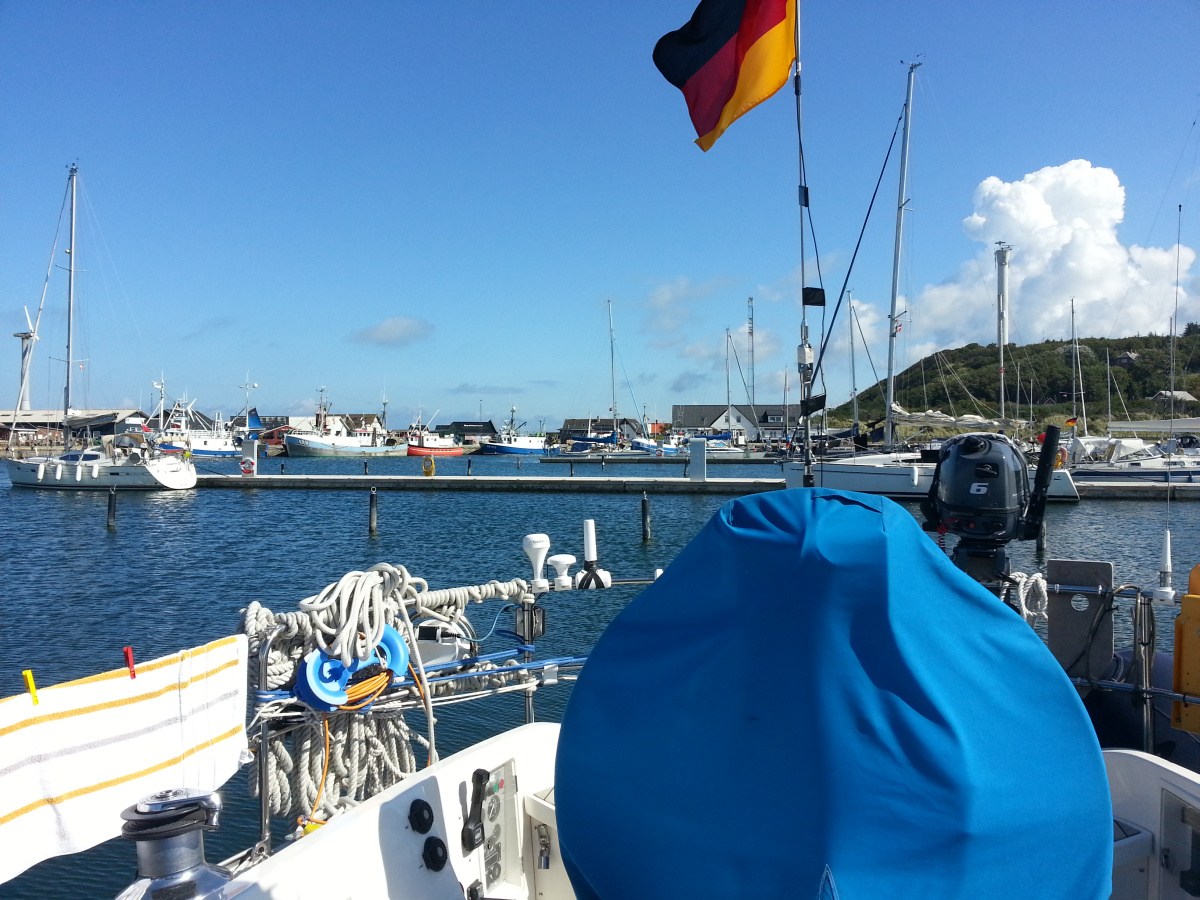 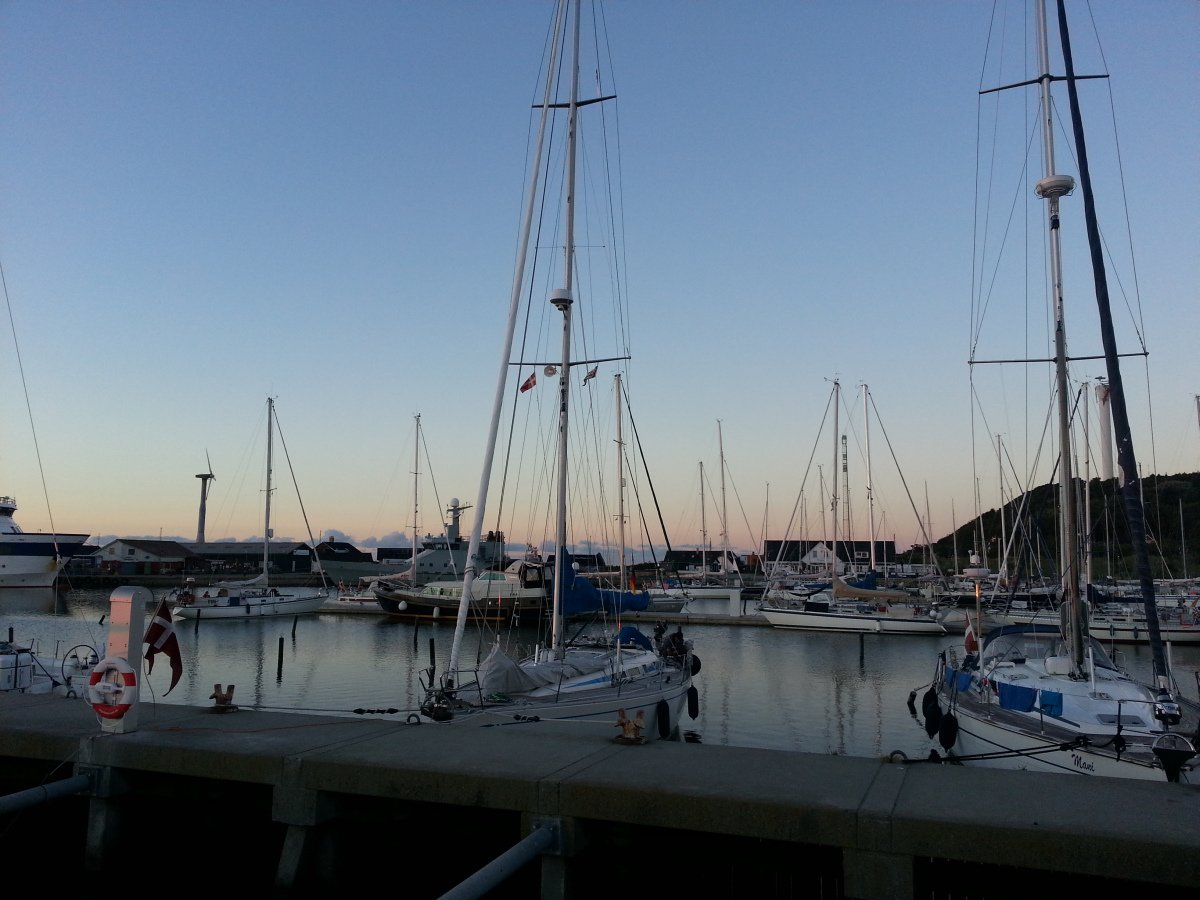 We had our morning swim in clear, green water, went for long walks on the beach, 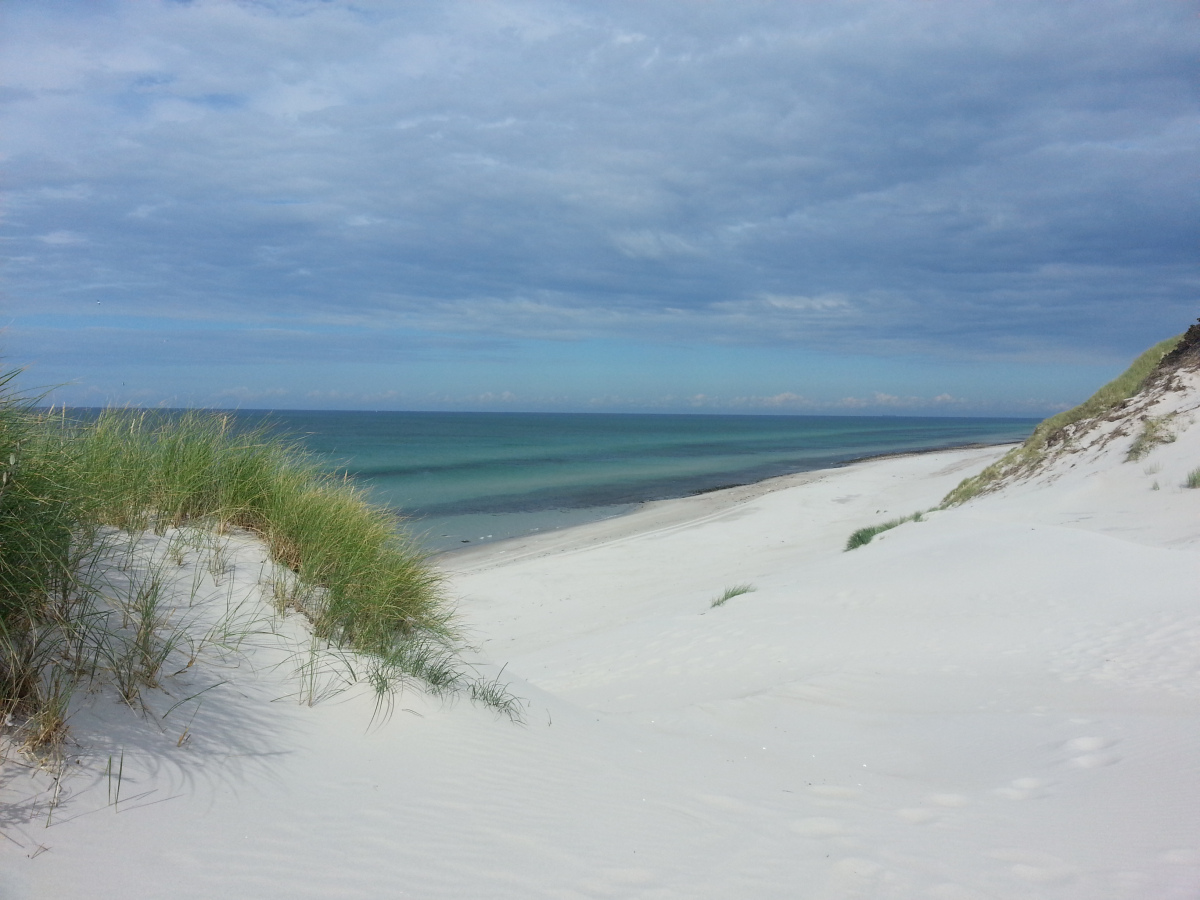 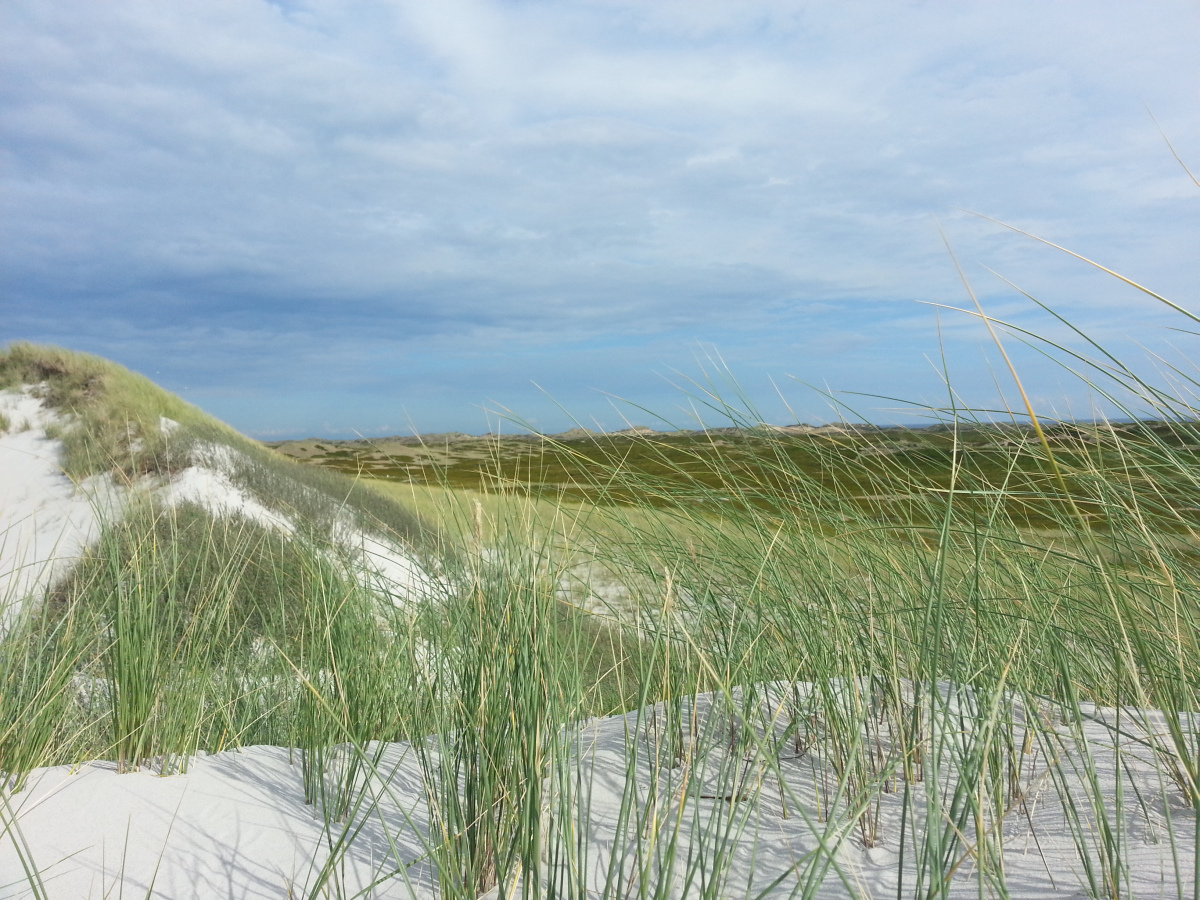 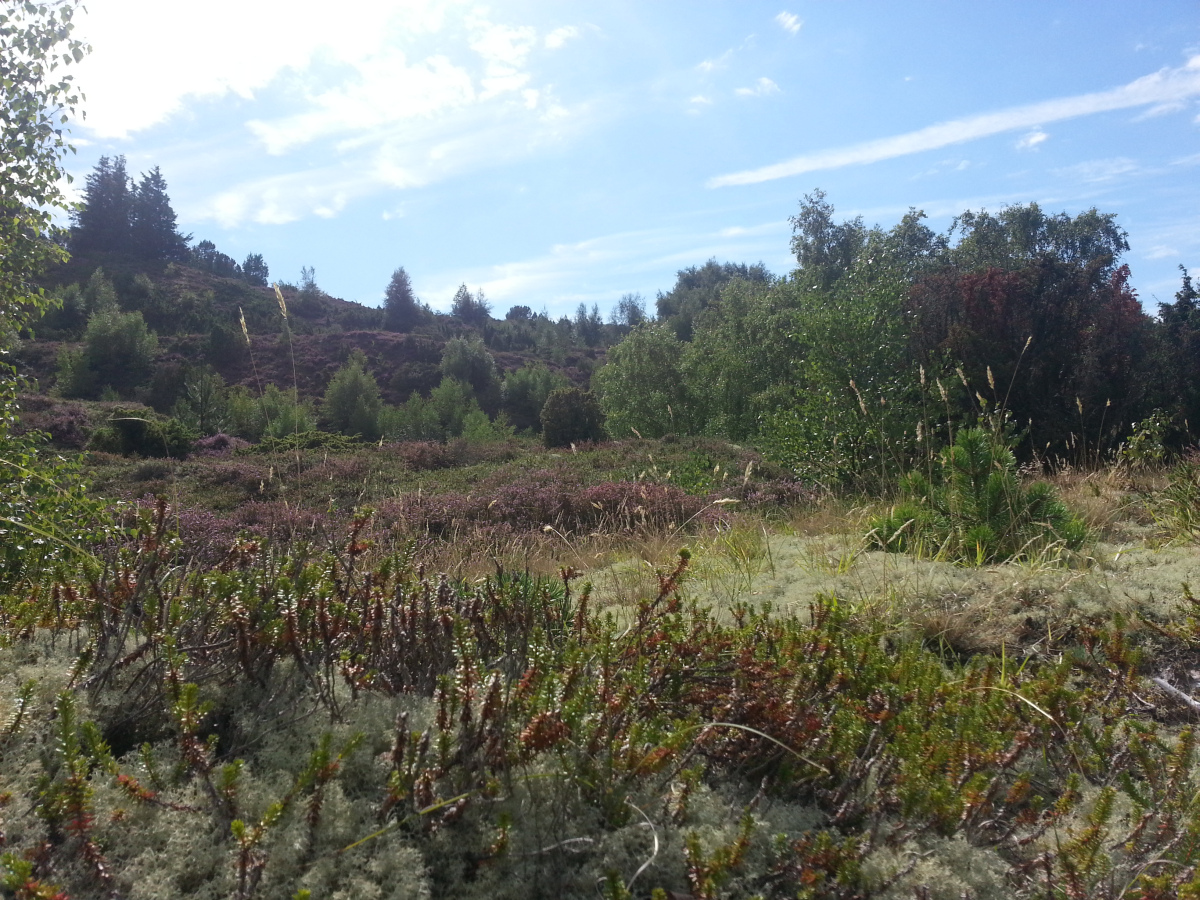 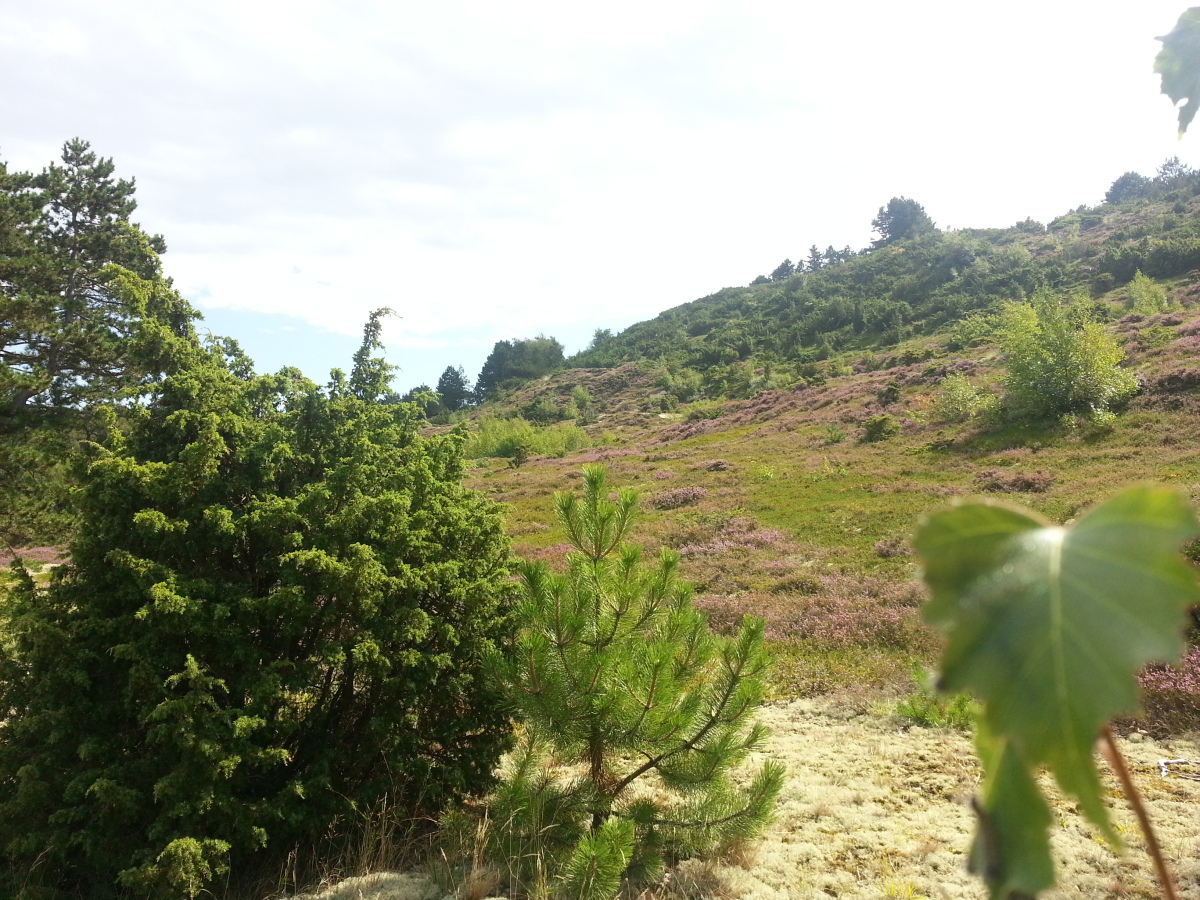 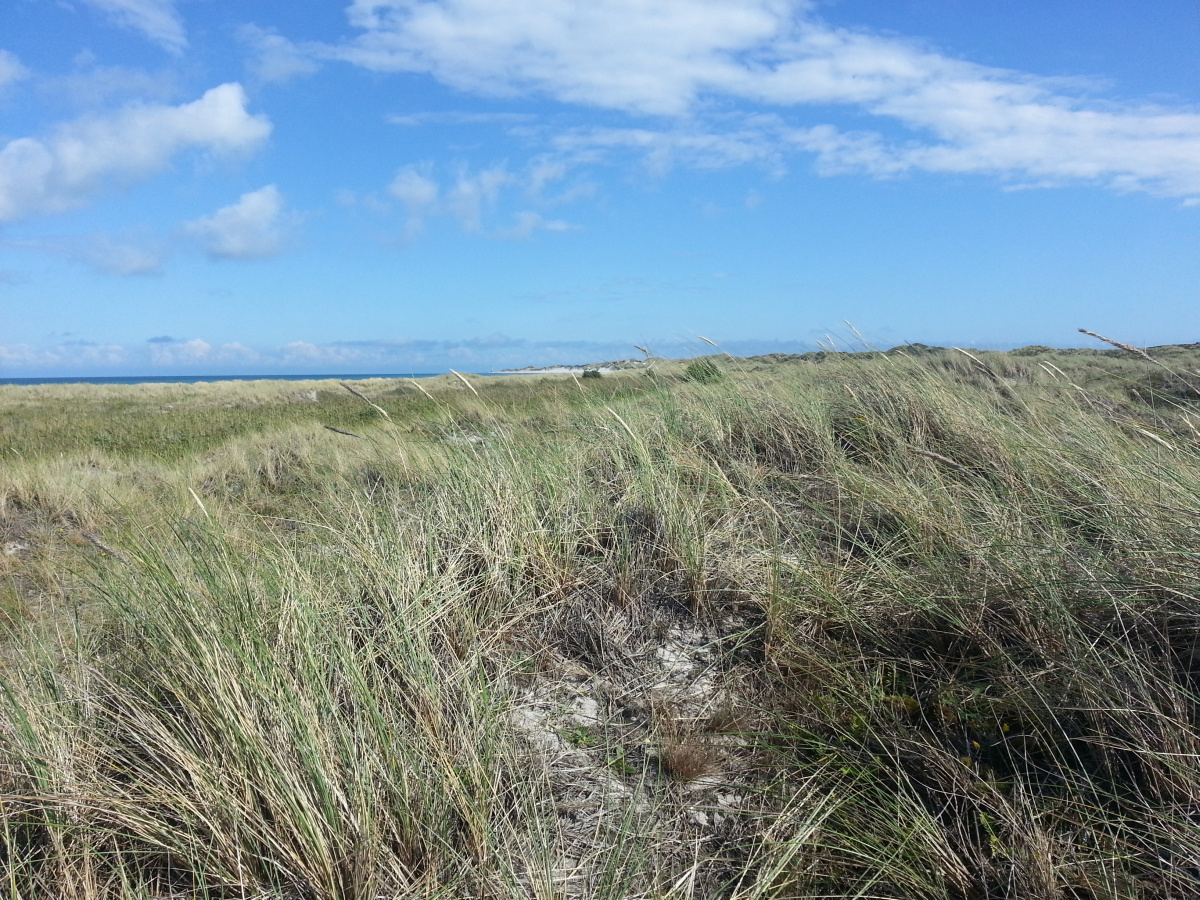 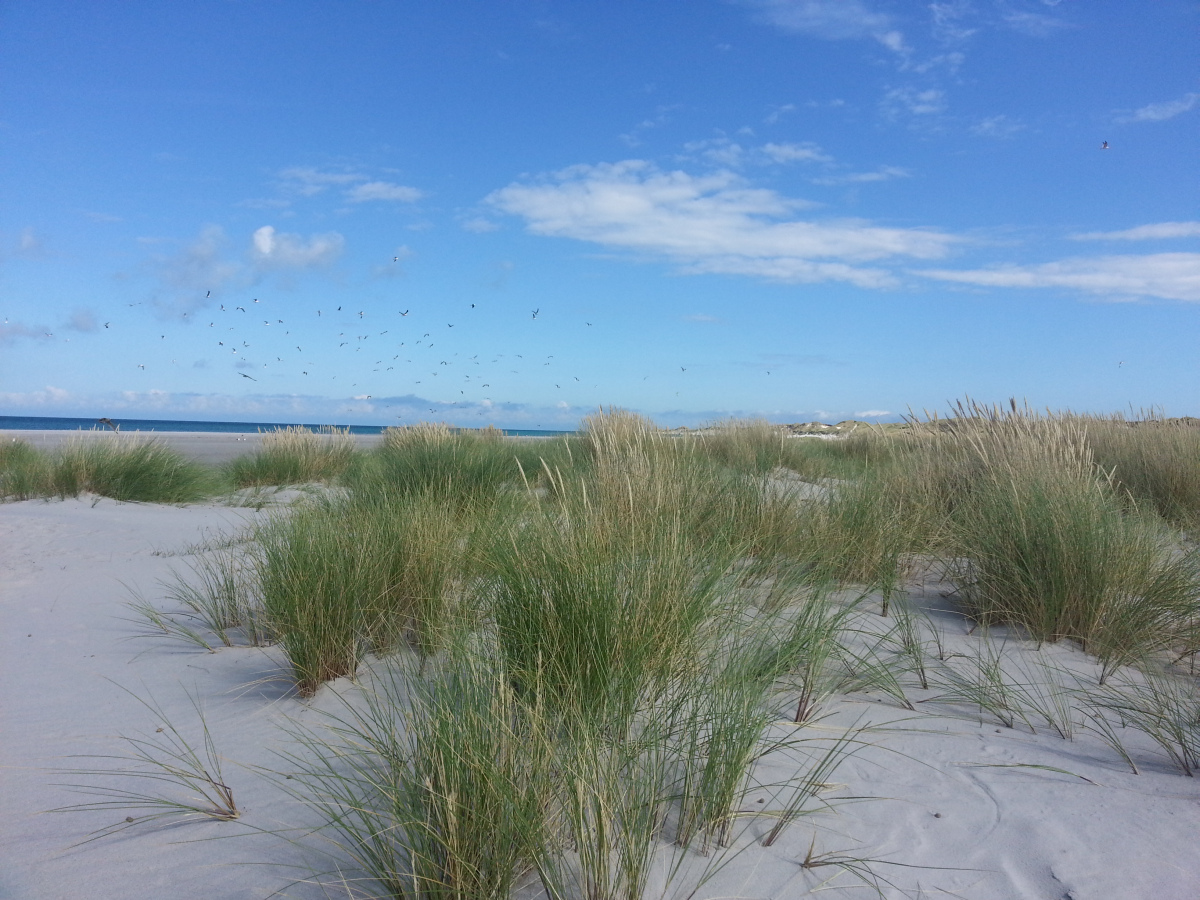 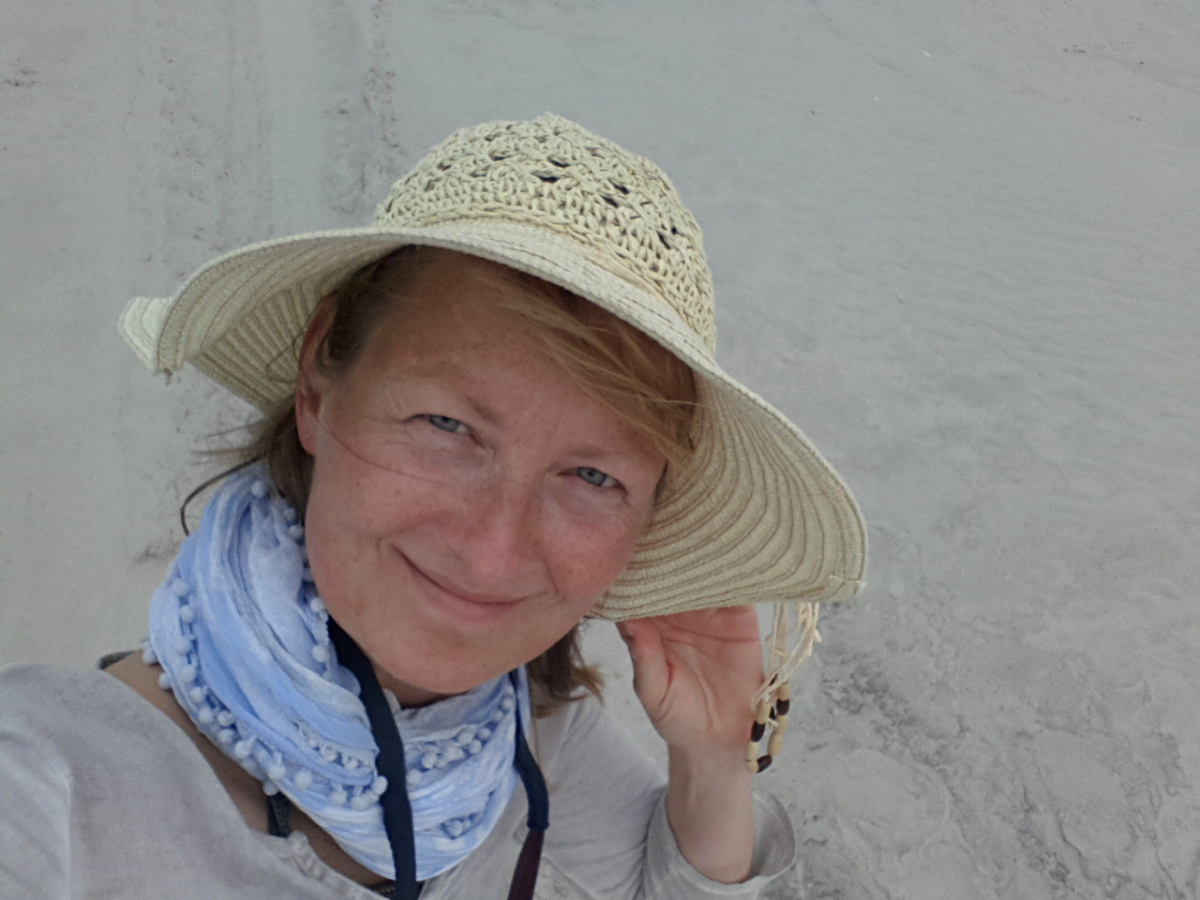 and to the small village. I had two days of kitesurfing, one on the north coast, and the other on the west coast, in near-ideal conditions, all on myself with only half a dozen walkers on the beach. We bought plaice from the local fishermen and had them for dinner on two evenings. Kirsten used my as guinea pig for her second attempt to bake a cake in our gas stove. 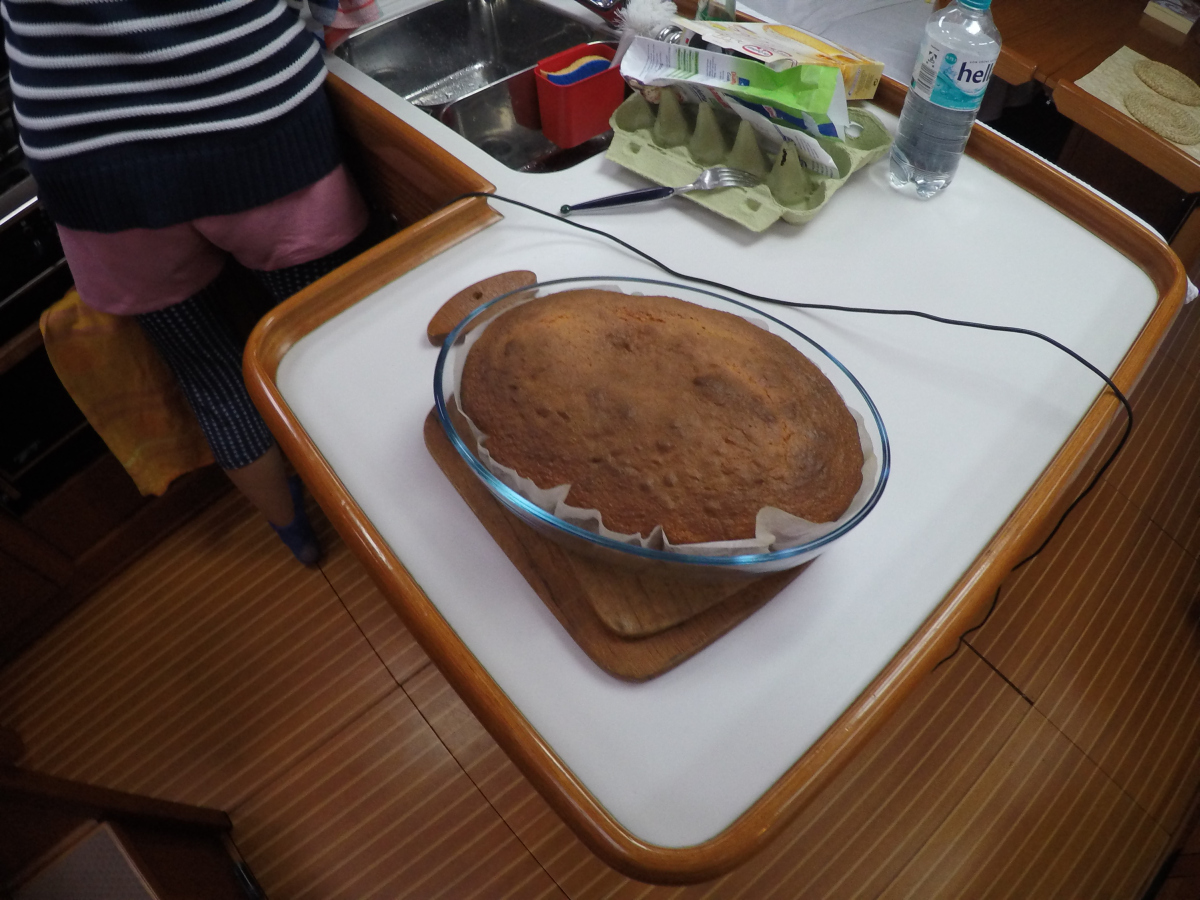 The upper half looked and tasted very nice whereas the bottom was still burnt black and flooded EASY with that burned smell yet another time.

We watched nice sunsets in the harbour 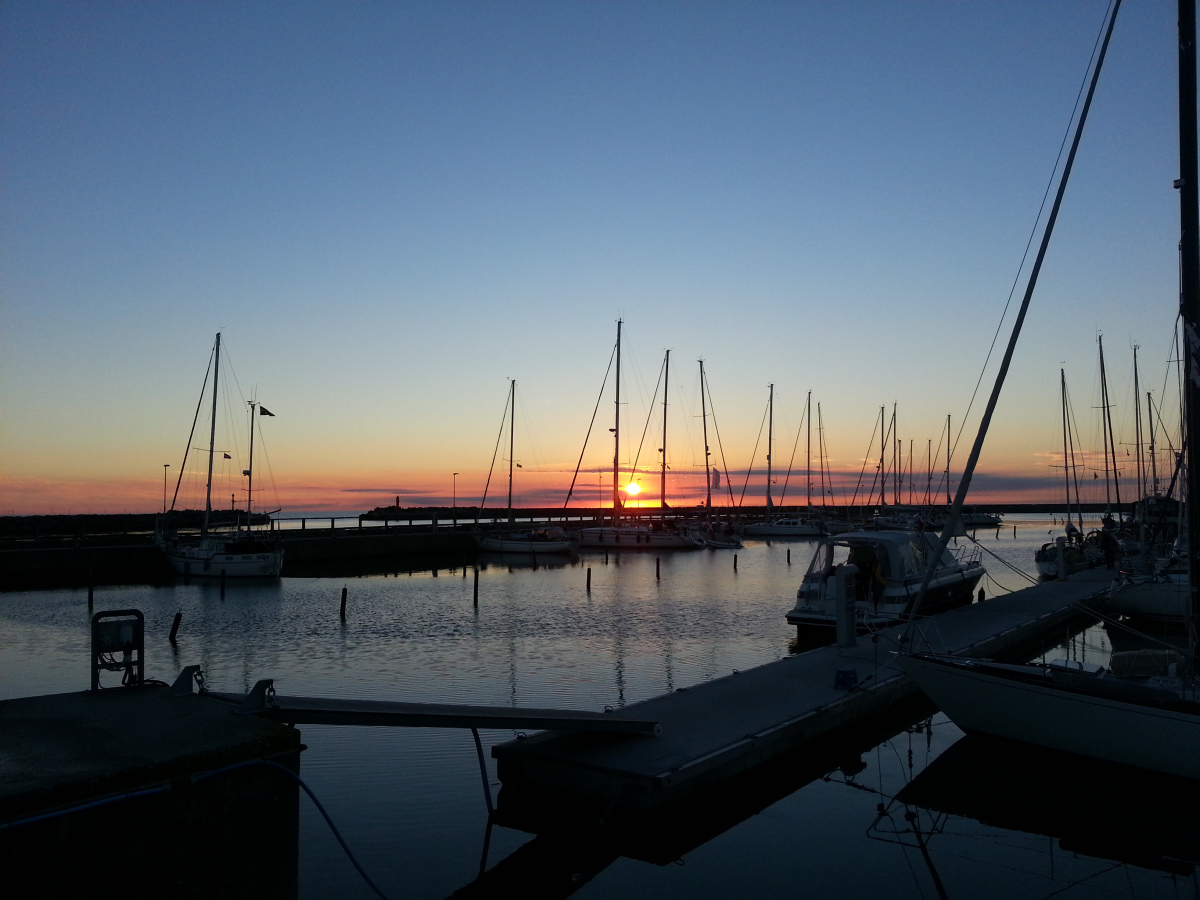 and I serviced our port genoa winch which had produced squeaking noises on some occasions.

I spent one day drawing the arch for our solar panels and the bimini to be constructed in 2017.

We met a very nice German-Danish couple with their son on their Bavaria 46 and ended up talking to each other, about us, our boats, and our future travel plans, for two days.