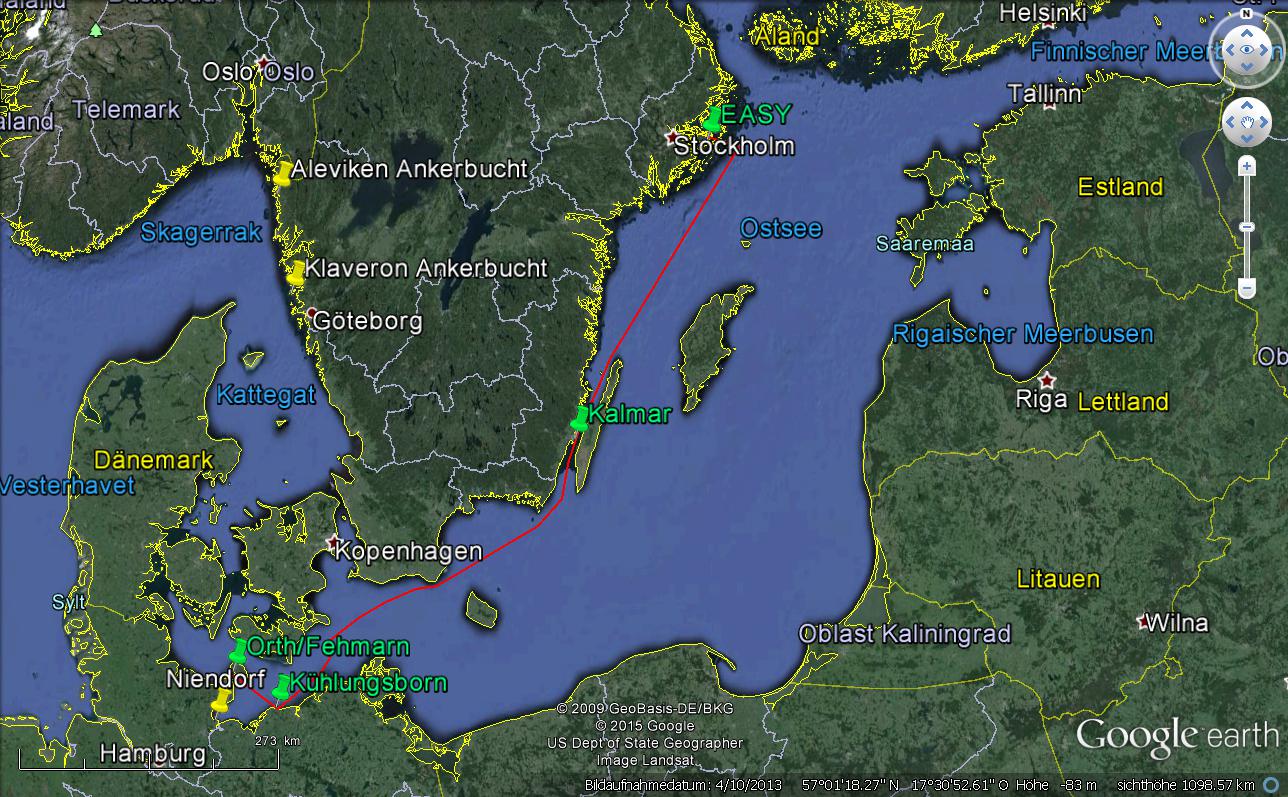 We (Kirsten and Ulrich) motored EASY from Fehmarn to Kühlungsborn in no wind. We tested the new navigational instruments and the new autohelm. We arrived before midnight in the dark. Roman arrived by car and joined us for the trip to Kalmar.

We left Kühlungsborn early in the morning and motored along the coast to Rostock. We then set sail and sailed close-by further north in pleasant easterly winds. During the day the wind increased slowly to 25 knots so we had to put in the second reef in the main and furled our Genoa to 90%.  The conditions deteriorated by an old swell coming in in an angle of 45° to the wind waves from the north east. We all suffered from seasickness and developped different coping mechanisms. Kirsten lay down and slept for hours on the cabin floor. Roman stayed in the cockpit and sat there motionless and quiet until midnight and then retired to his bunk. I found relief by putting a finger in my throat for several times which results in relatively normal brain function for about two hours after this procedure.

We had passed Denmark, the Isle of Mön and the cliffs called  Möns Klint. On passage to Sweden it got dark. There was no ship around except from cargo ships on the shipping routes. I then turned into my

I sleep for 15 minutes in the aft cabin, then I wake up to three independent alarm clocks. I get into the cockpit to hold a sharp lookout around the horizon. This has to be performed with great caution not to miss a dim light in the waves. Then I check the course on the plotter, AIS and the Radar for other ships. Then I usually have a second peek around. If there are no ships around and there is no collision course and the distance to the coast is large enough the three alarms are set and I go back to sleep. Da capo.

In the middle of the night I realised that I could not pass the south coast of Sweden since the wind had not shifted enough right to southeast or south as predicted. So I had to drop the sails and motor east along the south coast of Sweden. In 20 m deep water I suddenly encountered sudden, steep, braking waves up to 3 m heigt which must have been a result of some old swell reflected from the coast.

On Saturday we motored for endless hours across the Hanö bight. Two hours before the entry to the Kalmar Sound we had a nice downwind run with following seas. Motion sickness was forgotten. We then had a pleasant sail into the Kalmar Sound fore several hours until the wind decreased from 24 to 7 knots and we had to motor for another 3 hours until we moored alongside a Swedish ship in the crammed Kalmar harbour.

Robin an Jette picked us up by car the next morning. After a short trip to the harbour and to the Kalmar Sound Bridge Robin drove us to Fehmarn where we picked up our car. We arrived around midnight just in time to get some sleep to start the next working week on Monday morning.

A week later Kirsten and I drove back to Kalmar by car and sailed EASY further up north. Again, we had ideal downwind sailing conditions to start with, for the first six to seven hours, until the wind decreased. The rest of the trip we had to motor for 24 hrs to reach Bullandö near Stockholm in time. This time I started my singlehanded sailing mode early in the evening. Kirsten took over two shifts of 2-3 hrs each so I could catch up with my sleep deficit. In my final check of the planned route I had realised that the Bridge at the entry of the water leading to Bullandö Marina had just the required height of 20 metres. Still, the passage was exciting since our mast heigt is 19 m. From the cockpit one has no chance to find out how tight the fit was so I stopped EASY and approached the bridge very carefully.

On the passage I had listened to the gale warning on the finnish coastal radio station. We arrived just in time, before the rain started. Several hours later some unpleasant short, strong gusts shook the rig.

After a nice pasta dinner we spent the night on board. Early next morning we started our trip back home by bus to Stockholm, and by rental car to Kalmar.  From Kalmar we drove home in our own car, including a passage over the tall bridge between Malmö and Kopenhagen and a ferry trip from Rödby/Denmark to Puttgarden/Germany.

We motored some 15 miles up north and anchored in a nice bay where we spent two nights swimming, walking and testing our new dinghy. 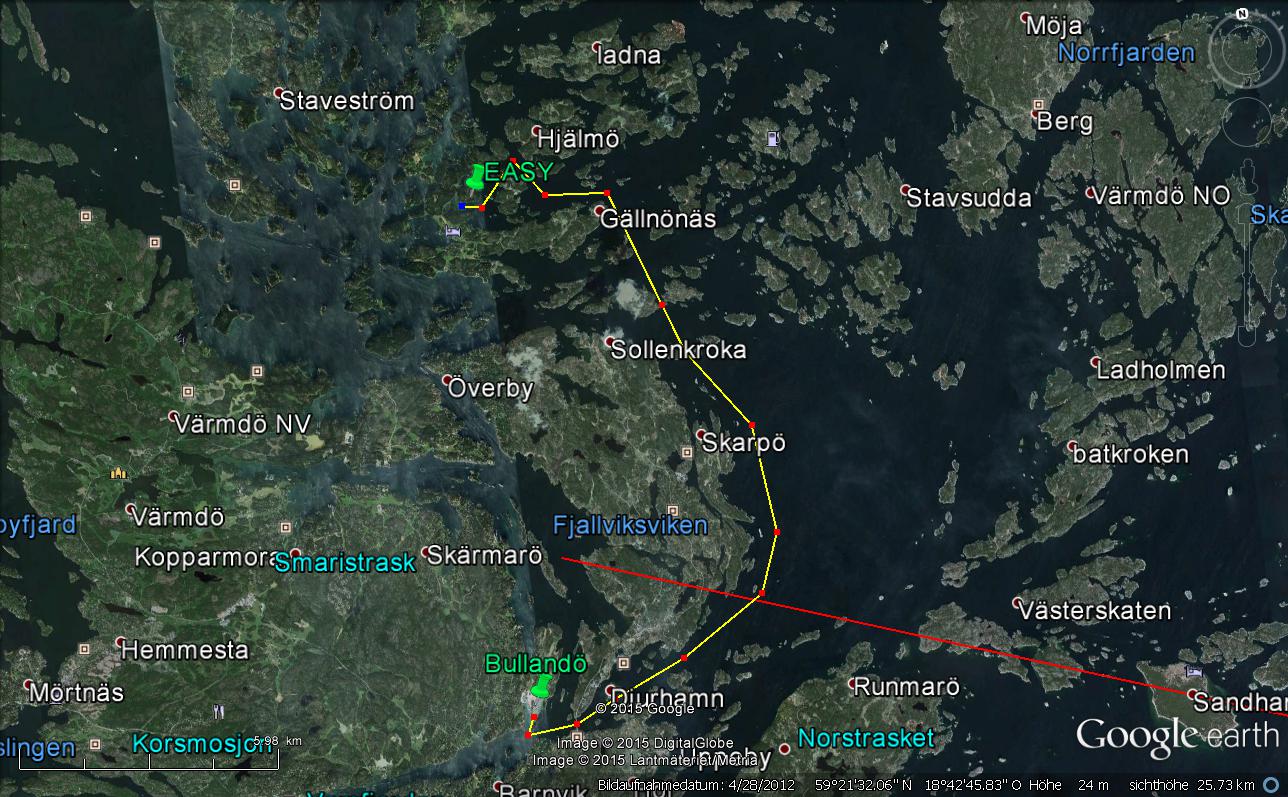 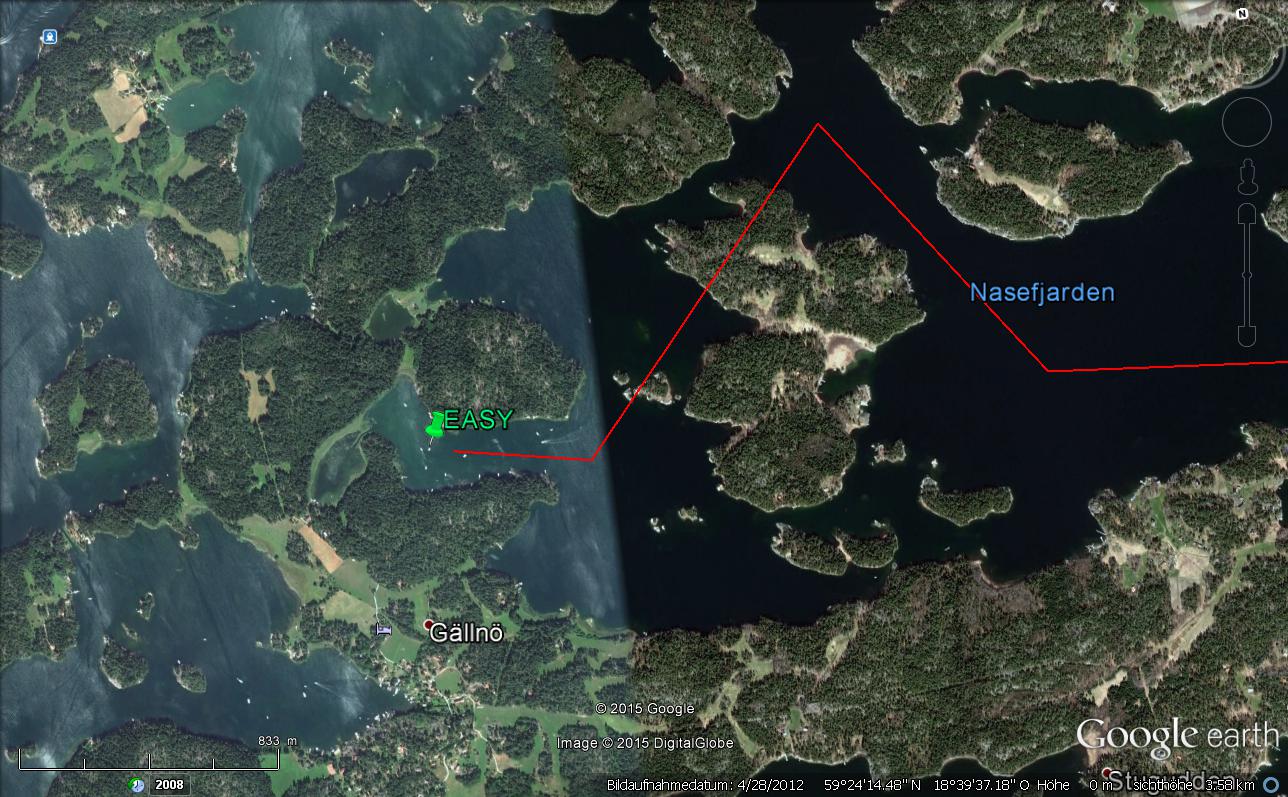 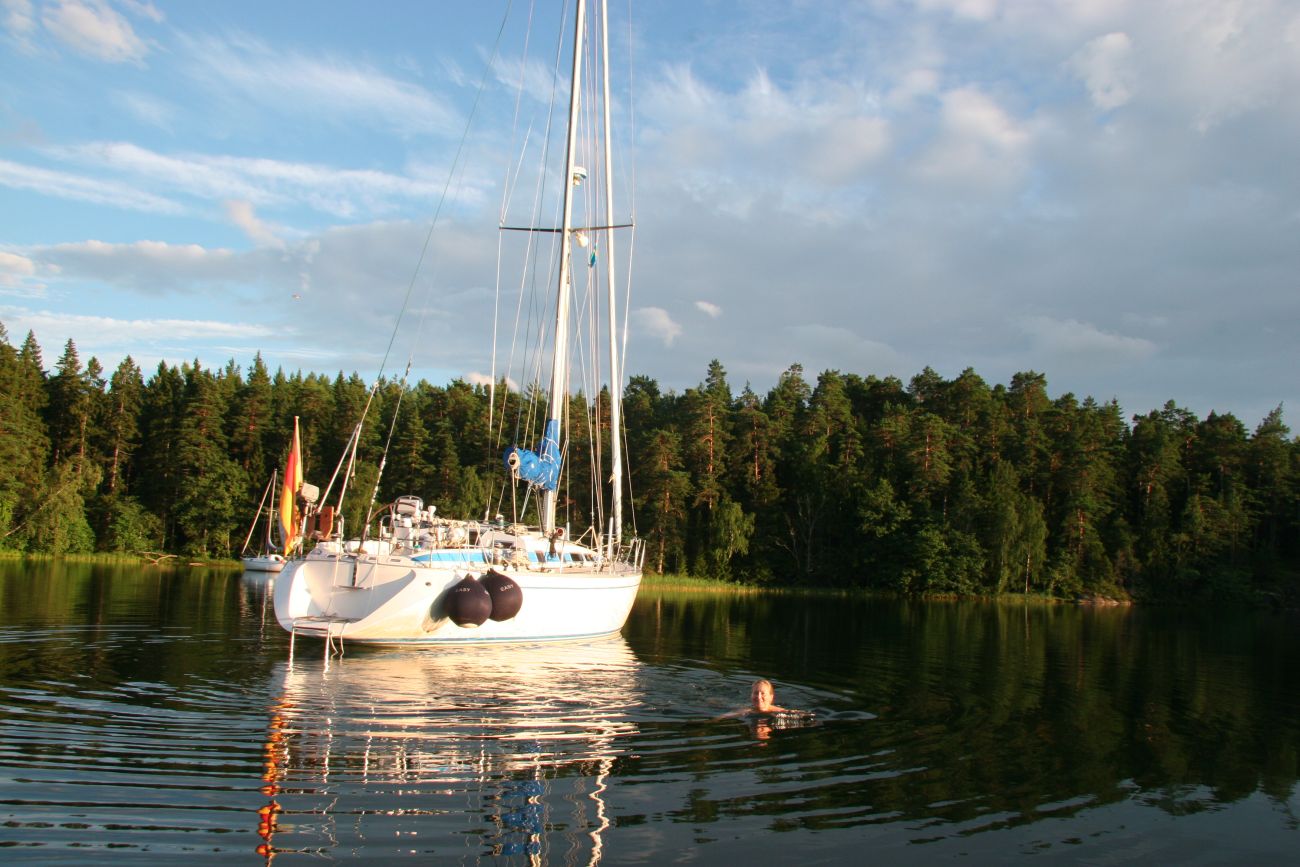 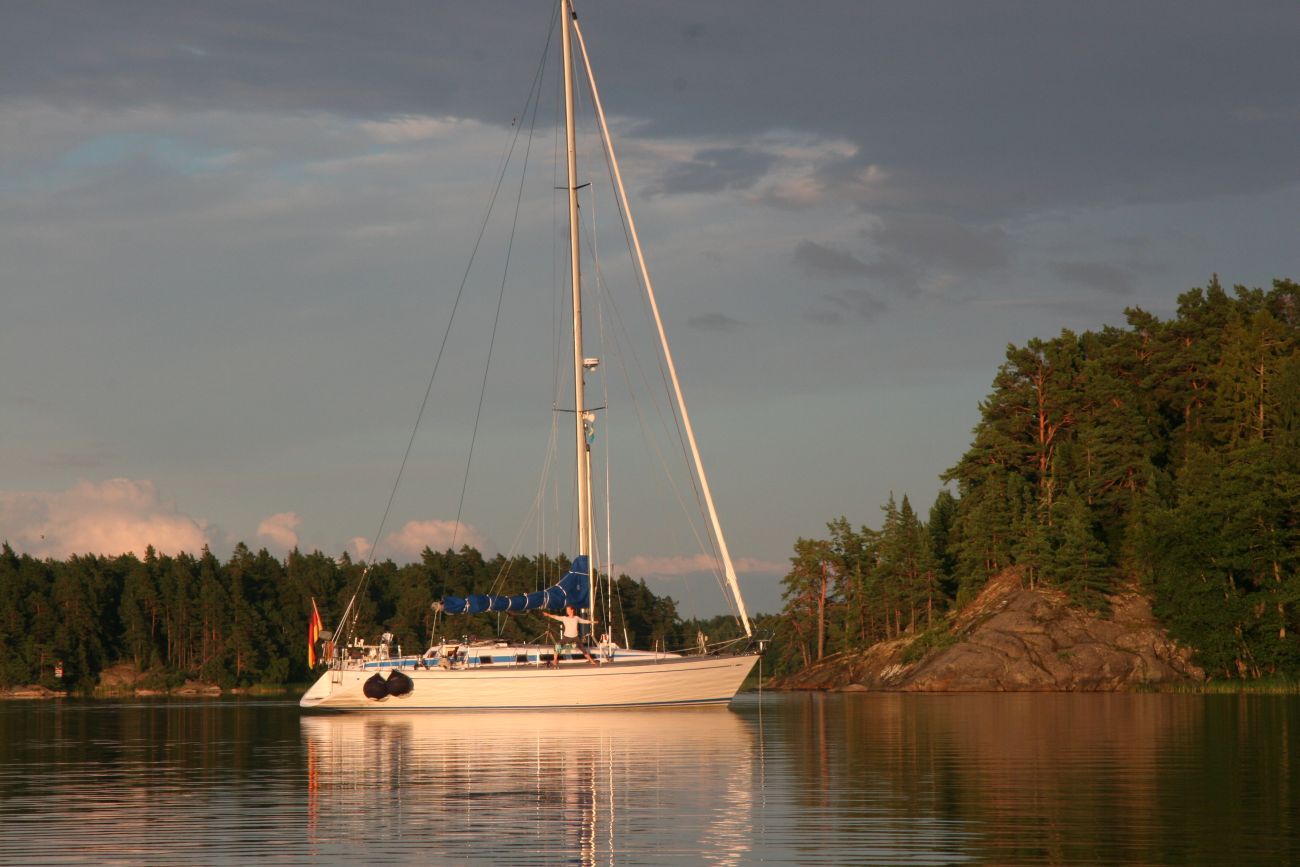 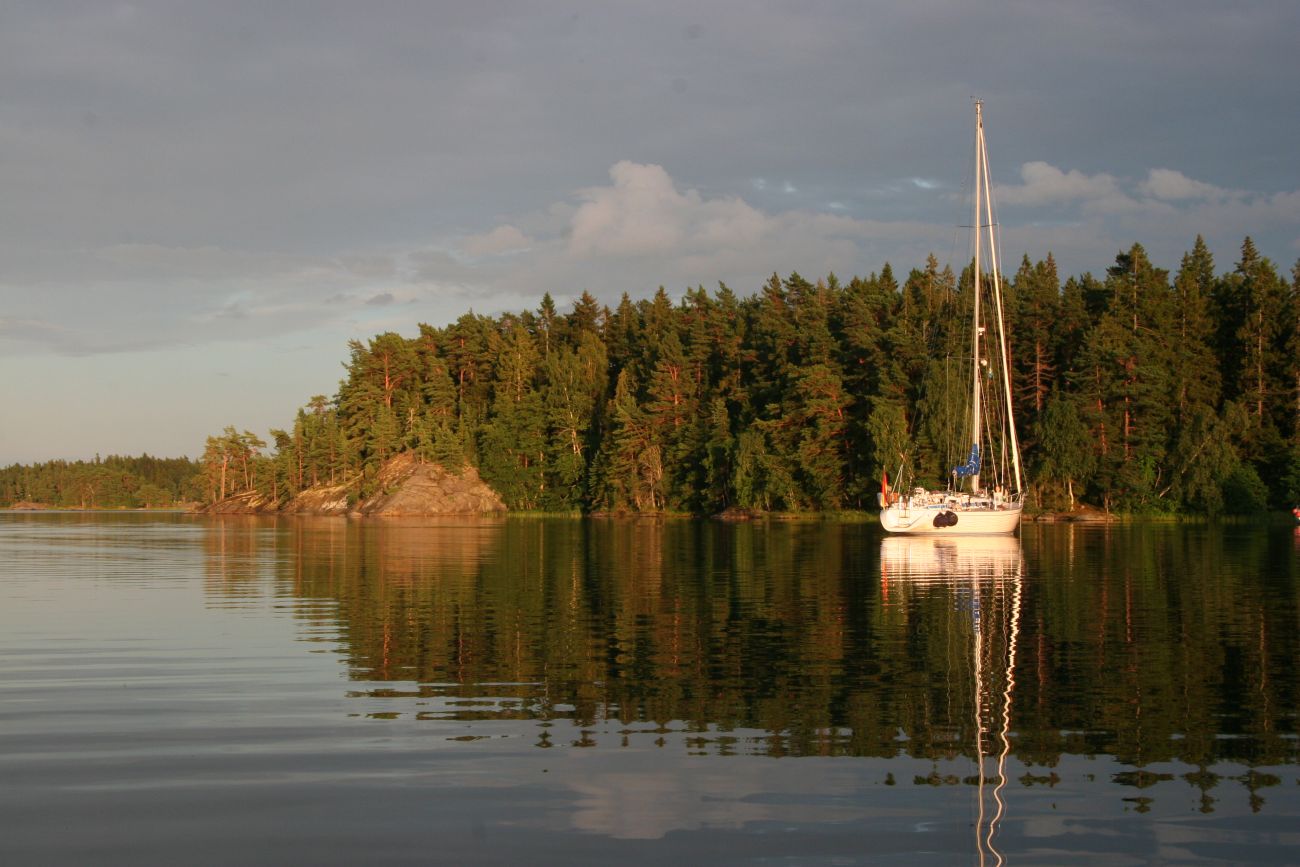 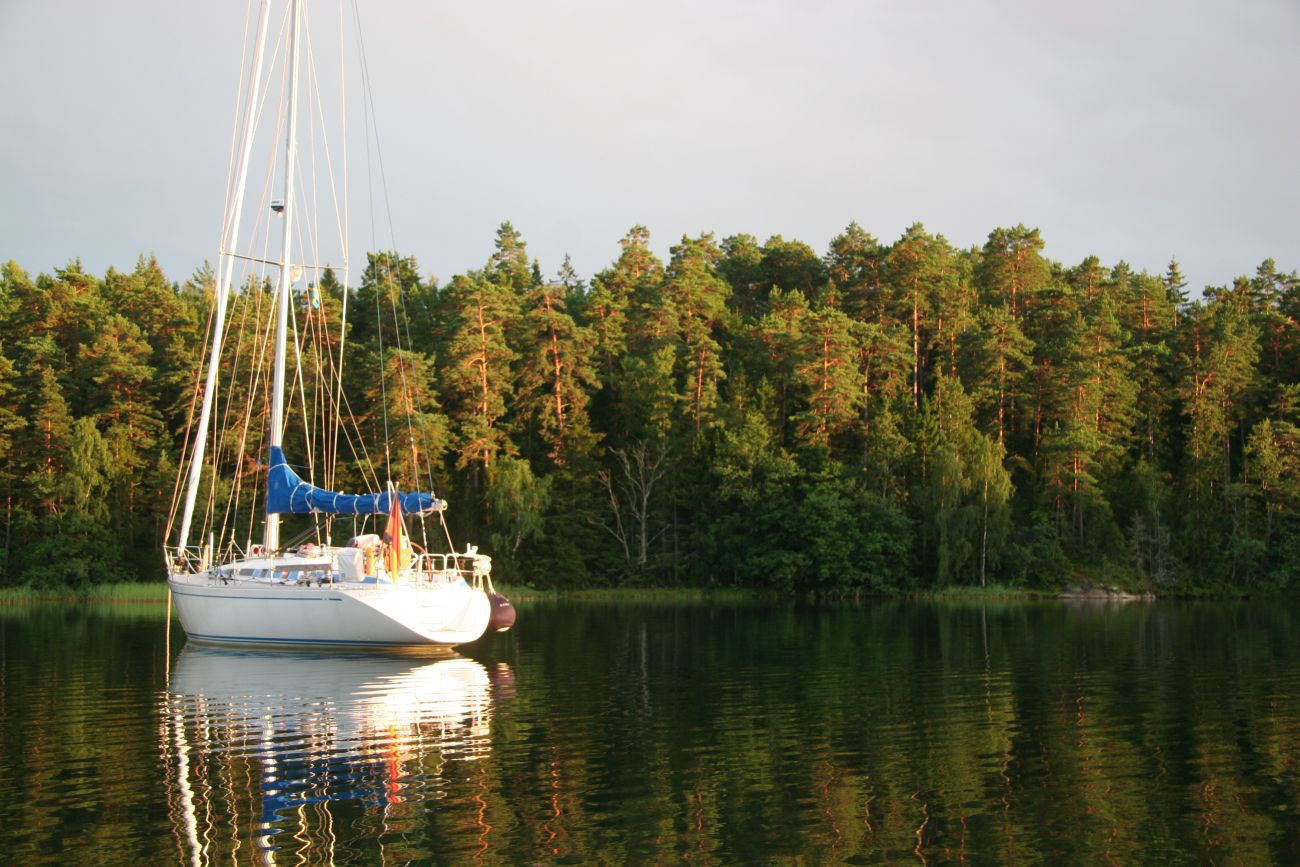 I found this interesting formation in the Aland archipelago. Looks like a meteor crater. We will check out this area: 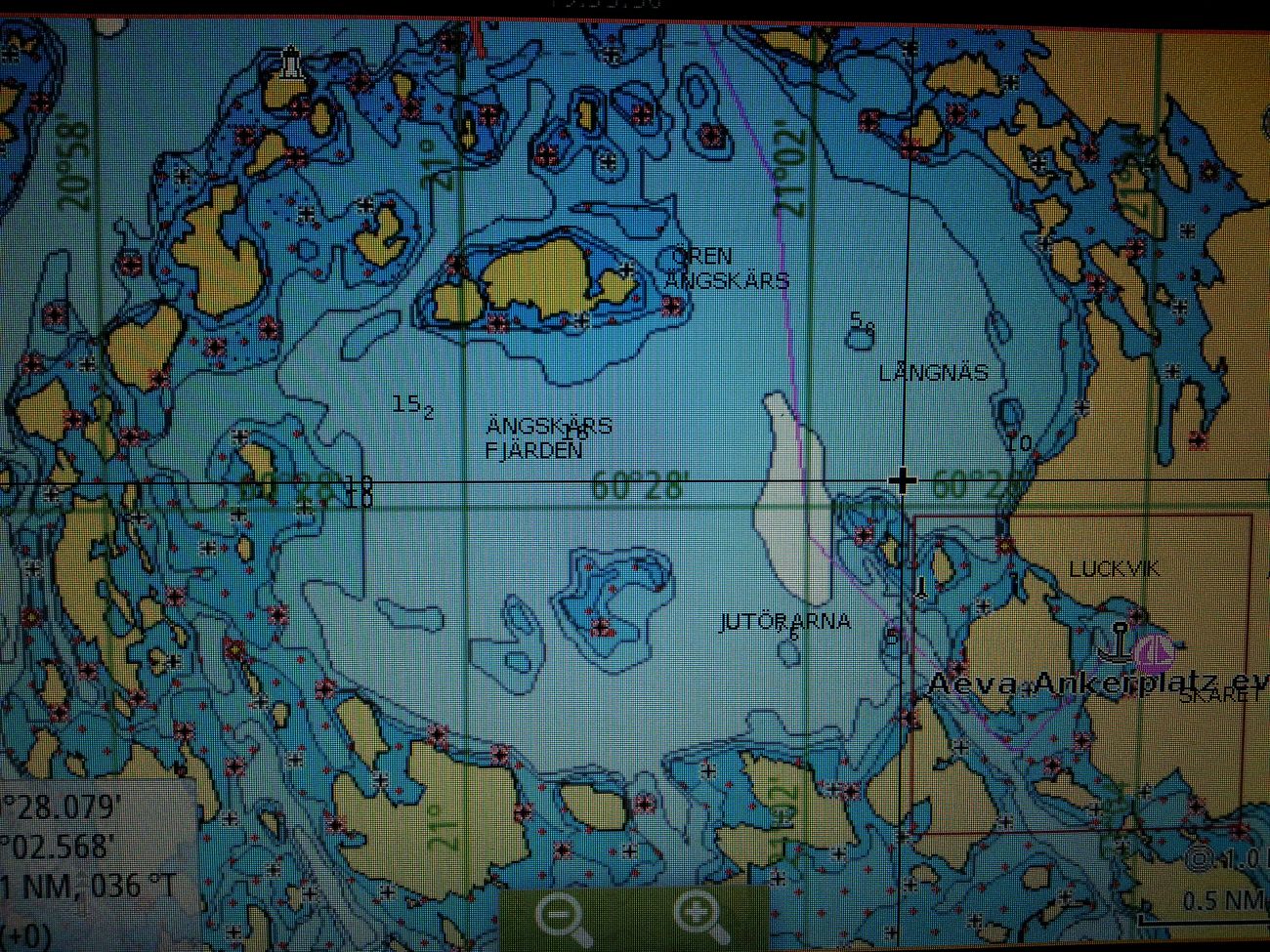